Dejie Johnson has performed for audiences from two to 25,000. She has sung with orchestras, big bands, conga-driven retro bands, jazz trios, and solo piano. She has appeared on stage, television, films, and in 3-D. Her hands have been featured on national TV and she has lent her versatile voice to animated characters such as Judy Jetson and Josie of the Pussycats.

In Atlanta in the late '70's and early '80's, Dejie entertained audiences at several popular Atlanta venues, including Showcase Cabaret, Tyrones, Gene & Gabes, and
The Menagerie. Later, she spent a decade in NYC performing at Don't Tell Mama's, The Ballroom, and she was one-half of an acapella bop duo, The New ABC's.

A West Virginia native, Dejie also played an autistic mining camp prostitute in Shot Through the Heart, a Broadway show that closed on the road. She was the only female to perform in The Plaids before it officially became Forever Plaid.

Since returning to Atlanta, Dejie has performed at Libby's Cabaret, The Red Chair, MJQ, and The Star Bar. She recently delighted audiences as Fraulein Schneider at the Neighborhood Playhouse production of the hit musical Cabaret. Her voice can also be heard on blurbs featured on several Turner Entertainment television channels.

Dejie's first solo CD, "Why Try to Change Me Now?" is filled with songs from an inherited suitcase of '40's and '50's music. It is available for purchase by contacting the artist here at www.dejie.biz.


Dejie's Video "The Folks Who Live On the Hill" 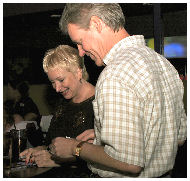 Dejie signs a CD at her Atlanta CD release party