Dejie's Video "The Folks Who Live On the Hill"

Dejie Johnson returned to Atlanta after a fun decade in NYC for a brief visit and has forgotten to leave. When Dejie worked at Turner Broadcasting she often used her vocal talents there as well. She co-hosted 'The Buddy Potato Show,' (pictured at right), a pilot for the TBS Superstation. Also, for TBS, she voiced both Witches from The Wizard of Oz (Good and Bad) and lent her photogenic hands for a 'Dumb & Dumber' promo.

Dejie has also been the voice of Judy Jetson and Josie of the Pussycats and was the alarmed face of Mrs. Huggsby on their 'Freakazoid' spot on the Cartoon Network. You might have heard her sing 'This Month at TCM' for Turner Classic Movies or trilling Ernie Johnson's Stat of the Hour for TNT sports or singing about the color of a room in TBS's Movie and a Make-over's theme song. She was thrilled to share the stage and her microphone with Ted Turner at the Clean Air Commuter rally for all Turner employees in 1999.

For the MJQ club scene Dejie wrote, produced and performed "DeLorna Von Graustein unt Eva Braun's: Collections from Around the World" in 2000. 'DeLorna' (pictured at left) has left that duo and performs special evenings for a discerning crowd. DeLorna's German accent came in handy when Dejie was cast as Fraulein Schneider in the recent Neighborhood Playhouse hit production of 'Cabaret'.

If you don't blink, you can see Dejie in reruns of 'Heat of the Night', and Oliver Stone's 'Wall Street'.

In 2005, Dejie Johnson returned to an Atlanta area stage after a 20-year absence to play Fraulein Schneider (pictured at left) in the hit musical Cabaret. Dejie played Fraulein Schneider, a boarding house owner in pre-World II Germany, who makes a difficult personal choice as the Nazis rise to power. 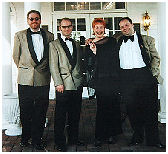